Waste water from Kitchen like Utensils wash water, Floor wash water, Boiled Rice water(Ganji) etc is collected in a tank. Solid waste like Left out Rice (In Plates), Excess Rice from Kitchen, Vegetables etc are separated. The waste water is treated in Kitchen Effluent Treatment Plant and Solid waste is converted to Bio Compost through Organic Bio Composter. Thus generated compost is being used for Gardening inside the Temple premises.

Waste water from the Tank is pumped to the Treatment plant, where Ph correction takes place automatically. Ph corrected waste water is subjected to Biological Aerobic process in which organic matters are degraded without addition of any chemicals. The Technology employed for this purpose is called Moving Bed Bio Reactor( MBBR) which is one of advanced technologies employed world over for Waste treatment. 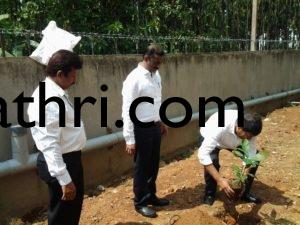 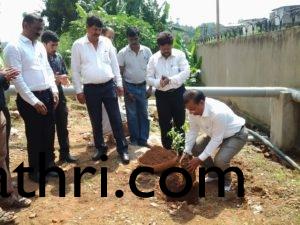 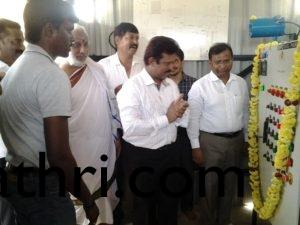 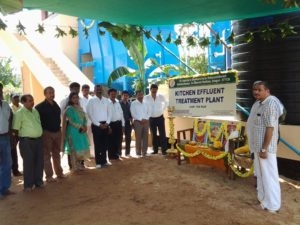 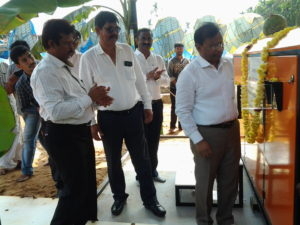 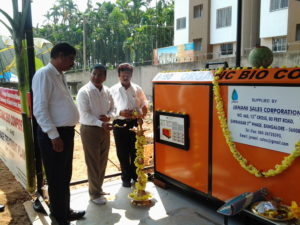 For all devout hindus it has always been ‘Ganga Snanam Tunga Panam”. For eons this adage has been like a prayer on the lips of every ardent practicing hindu. So it is very important that whenever one pays obeisance to the famous Sringeri Sharadamba temple at Sringeri, the devout takes a dip in sacred river Tunga and take the river water as TEERTHAM in total devotion to goddess Sharadamba.

But off late it has been observed that the sacred waters of Tunga at Sringeri is getting highly polluted both from the ever increasing in flow of raw sewage and other trade effluents without any check.

It is a tragedy that even after 67 years of independence the sacred pilgrimage town of Sringeri does not have the basic facility of a Sewage Treatment Plant and all the sewage generated daily, approximately 9MLD, is being allowed to flow in to the sacred river Tunga. Also there was no Solid waste management plant till 2012 and all the SW was being dumped in to River Tunga. It is disgusting that the urban local body at Sringeri has done precious little to arrest this dangerous trend and Karnataka Pollution Control Board has utterly failed to check this menace

The pilgrimage town of Sringeri has a steady increase in the number of tourists and pilgrims over the years and if this situation of untreated raw sewage is allowed to flow in to river Tunga, the sacred river will be converted in to a sewage drain just like what we have done to Vrishabhavathi in namma Benagaluru.

The unsuspecting pilgrim instead of getting charged spiritually is in fact charged with disease borne germs in the contaminated water. My ernest and successive representation to KSPCB has so far has not yielded the expected and desired results.

It is high time the Government of Karnataka steps in to recover the glory of sacred river Tunga by setting up sewage treatment plants of adequate capacity on war footing and ensure the age old adage is true even today.

I love my India